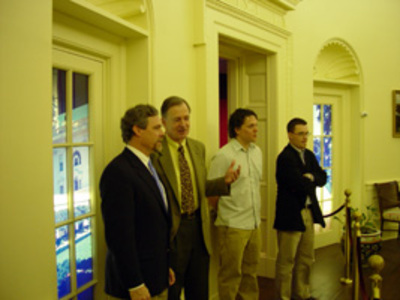 The director of the Carter Library, Jay Hakes (second from left), led Gleaves, Eian, and Brian on a tour through the museum. Here they stand in a meticulous reproduction of the Oval Office as it appeared between 1977-1981. Because the 39th president is a graduate of the U.S. Naval Academy, there are numerous nautical objects in the Oval Office. There is also a bust of Harry S. Truman. On the desk is the famous plaque associated with Truman, "The Buck Stops Here," given to President Carter by Margaret Truman.