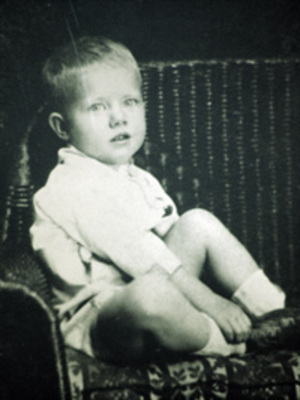 Jimmy Carter has spent much of his life in the rural South, about two hours' drive south of Atlanta. He grew up not in Plains, as is widely believed, but in Archery, Georgia, on his parents' farm. This photograph was taken in 1926, when he was two.

Jimmy Carter described his father as a "stern disciplinarian." "My most vivid memory of a whipping," Carter wrote in his first autobiography, "was when I was four or five years old. I had been to my Sunday School class, and as was his custom Daddy had given me a penny for the offering. When we got back home, I took off my Sunday clothes and put the contents of my pocket on a dresser. There were two pennies lying there. Daddy thus discovered that when they passed the collection plate I had taken out an extra penny, instead of putting mine in for the offering. That was the last money I ever stole" [Carter, Why Not the Best?, p. 19].