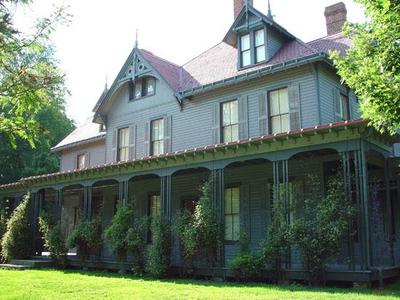 James A. Garfield home. In the 1870s, James A. Garfield was widely regarded as the Republican party's greatest orator. He established his reputation in the U.S. House of Representatives, where he had served since the Civil War. He became the Republican nominee for president in an era when it was considered undignified for presidential candidates to campaign on their own behalf. (Others campaigned for them.) What to do with such a great orator -- hide one of his greatest strengths under a bushel basket? The solution was to encourage Garfield to deliver speeches from his front porch. So it was Garfield's oratorical gifts that gave rise, in 1880, to the first "front porch campaign" in American history. Some 17,000 visitors came to hear the Republican candidate during the autumn of 1880. The picture above is of Garfield's home in Mentor, Ohio. (Locals pronounce "Mentor" to rhyme with "enter.") The house was punningly dubbed "Lawnfield" by reporters who staked out a spot on the grass. This view is from Mentor Avenue, looking at the famous front porch where Garfield speechified.