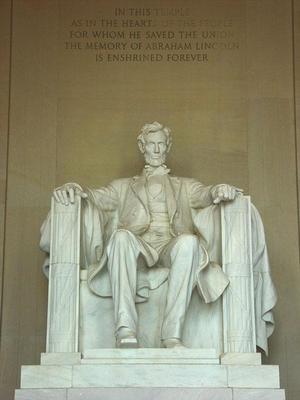 The groundbreaking ceremony took place on the 105th anniversary of Lincoln's birth, February 12, 1914. The memorial took eight years to construct. During that time, the U.S. was dragged reluctantly into the First World War, and President Woodrow Wilson tried to reshape American foreign policy "to make the world safe for democracy." Henry Bacon, watching the temple take shape, said the memorial would be "a fitting tribute to all who love liberty."

Lincoln Memorial, Washington, DC. The large statue of Abraham Lincoln sits on a "throne" inside his "temple." He was a Western president -- Springfield, Illinois, is on virtually the same latitude as Washington, DC -- so it is as if Lincoln were back in the West, facing east toward the seat of government on Capitol Hill.

Daniel Chester French was commissioned to design and sculpt the statue of the sixteenth president. It was made from 28 blocks of Georgia marble and took more than one year to complete. French was assisted by six brothers from the Piccirilli family. The inscription above Lincoln's head reads:

IN THIS TEMPLE
AS IN THE HEART OF THE PEOPLE
FOR WHOM HE SAVED THE UNION
THE MEMORY OF ABRAHAM LINCOLN
IS ENSHRINED FOREVER.