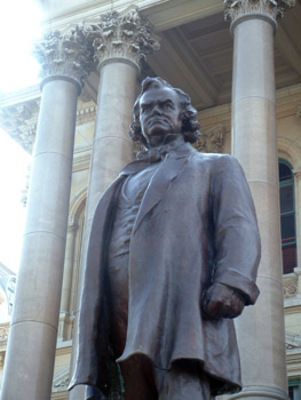 This statue of Stephen Douglas, "the Little Giant," stands guard at the entrance of the Illinois Capitol in Springfield.

Douglas unsuccessfully sought the Democratic presidential nomination in 1852 and 1856. Finally, in 1860 he won the nomination of his party -- but lost to Lincoln in the general election. (He came in second in a field of four.)

Douglas would not live long after the contest. He contracted typhoid fever and died on June 3, 1861, just two months after the outbreak of the Civil War.