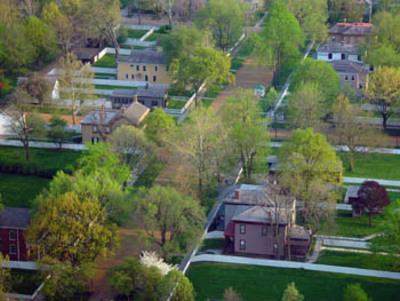 This aerial view of Lincoln's house at sunset was taken by Brian Flanagan, who hurridly snapped the photo while hanging from the wing strut of a Cesna 172. We lost Brian, but got a great photo for his sacrifice. The photo, taken moments before he lost his grip, shows the neighborhood near downtown Springfield where Abraham and Mary Todd Lincoln lived with their sons. The simple clapboard colonial (left center) is the only house they ever owned. The National Park Service administers the site.