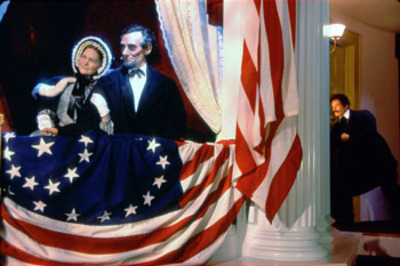 On Good Friday evening, April 14, 1865, the Lincolns went to Ford's Theatre to see "Our American Cousin." Accompanying the Lincolns were an engaged couple, Major Henry Reed Rathbone and Clara Harris. During the third act, the president took his first lady's hand, prompting Mary to ask, "What will Miss Harris think?"

Lincoln replied, "She won't think anything about it."

Those were his last words. Moments later, John Wilkes Booth made his way toward the president's box. An actor, he was recognized by the employees at the Ford and able to gain easy access to the presidential party. Shortly after 10 p.m., he aimed his derringer and fired a single shot into the back of the president's head. The president never regained consciousness and died at 7:22 on the morning of April 15th.

Secretary of War Edwin Stanton, who was on the death watch, said, "Now he belongs to the Ages."