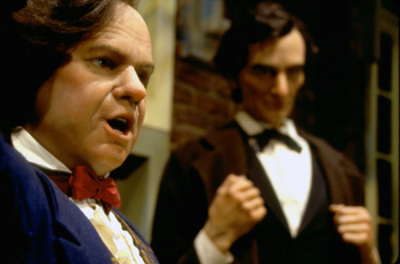 In 1858, Republican Abraham Lincoln challenged incumbent Democrat Stephen A. Douglas for one of Illinois' two Senate seats. During the campaign they tangled in seven debates; the one represented in this scene took place at Knox College.

In these famous debates Senator Douglas consistently maintained that the states should choose whether to be slave or free. Candidate Lincoln argued in effect that "a House divided against itself cannot stand" -- Americans should stop the spread of the peculiar institution into the western territories.

In the final debate, at Alton, Illinois, on October 15, 1858, Lincoln said, "Stephen Douglas assumes that I am in favor of introducing a perfect social and political equality between the white and black races. These are false issues. The real issue in this controversy is the sentiment on the part of one class that looks upon the institution of slavery as a wrong, and of another class that does not look upon it as a wrong. One of the methods of treating it as a wrong is to make provision that it shall grow no larger."

The Lincoln-Douglas debates were not anything like the political debates in today's sound-bite culture. The 1858 format opened with one speaker making his case for one hour, followed by his opponent getting an hour and a half to make a rebuttal; then the first speaker delivered a half-hour counter-rebuttal. Large audiences gathered to hear these three-hour marathons.