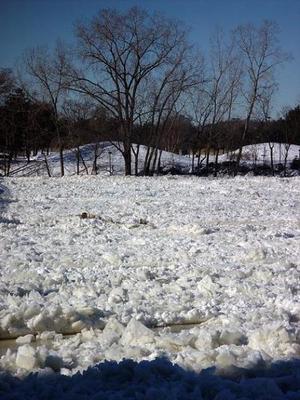 Ah-Nab-Awen Park and the grounds of the Gerald R. Ford Museum, near downtown Grand Rapids, Michigan. In the fore- and middle-ground is the 2005 ice jam on the Grand River that meanders through the middle of the city. "Ah-Nab-Awen" is a Native American word for "resting place." The six-acre park commemorates not only the nearby future resting place of President and Mrs. Ford, but also the site of a Native American village. The name for the park was proposed by the Elders of the Three Fires Council.