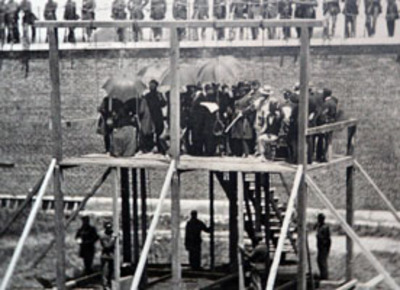 Lincoln's assassination was part of a wider plot planned by John Wilkes Booth and his co-conspirators. In addition to Booth's act, his henchmen planned to assassinate Vice President Andrew Johnson and Secretary of State William Seward. While the plan to assassinate the vice president was never carried out, Seward was attacked at his home. Four conspirators were hung for their crimes, and Booth was shot to death by an officer who discovered him nearly two weeks after Lincoln's assassination.