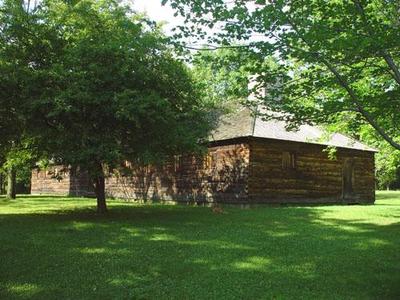 Under Washington's command were some 8,000 soldiers along with 500 women and children (camp followers). The British had almost double that number of troops several days' march to the south in New York City -- their main army in the rebellious colonies. Hostilities had not entirely ceased with Yorktown, nor had the peace treaty been signed, so Washington and the Continental Army had to remain vigilent. They had to be ready to campaign if peace negotiations in Paris broke down. So they made plans to retake New York City in the spring. They took up positions around West Point, with the main body of troops encamped a few miles farther north in the vicinity of Newburgh and New Windsor. There they waited.

Washington had seen mutinous uprisings before, so he knew that he had to keep the men busy through the winter. He kept them battle ready with daily military formations and drills. He also kept them busy building things. In December 1782, at the suggestion of a chaplain, Washington had a large log cabin constructed -- the so-called Temple of Virtue. At 110 by 30 feet, the Temple was to serve a variety of functions: chapel, commissary, courtmarshall hearings, and meeting hall among them.