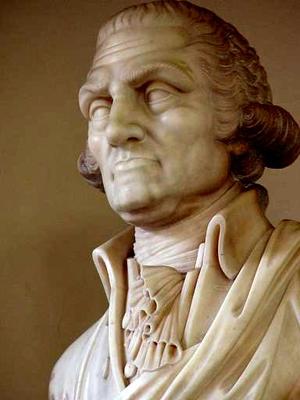 George Washington -- the best likeness? When the Marquis de Lafayette visited Boston's Old North Church in 1824 and spied this bust of the general under whom he had served, he remarked, "Yes, that is the man I knew and more like him than any other portrait."

Historian James Thomas Flexner called George Washington the "indispensable man" among the Founders. Without Washington, the new republic would not have survived the armed rebellion against the mother country, the tumultuous years under the Articles of Confederation, and the first decade of nationhood under the new Constitution. His leadership made the difference at critical points in the two decades between 1775 and 1796.

Washington must have possessed the most powerful presence of his generation because he was unanimously elected to every high office in which he served. In 1775, the Continental Congress selected him to be the commander in chief of the Continental Army. In 1787, the delegates selected him to lead the Constitutional Convention. In 1789 and again in 1793, electors unanimously voted for him to be president of the United States. He was without peer.

The above bust of Washington was presented to the Old North Church (which is actually called Christ Church) by Shubael Bell, in 1815.