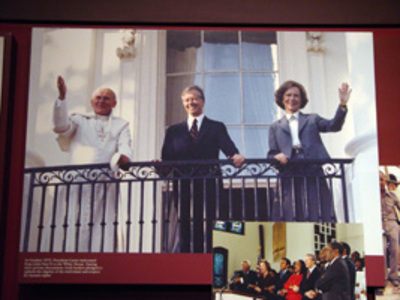 About one year after being elected pope, John Paul II made an historic visit to the United States in 1979. He was the first pontiff to make the journey over the Atlantic. While in the U.S., John Paul II went to the White House and was hosted by the Carters. They shared a commitment to spreading human rights around the globe.

During his 26 years in the Vatican, Pope John Paul II would meet with five U.S. presidents. He met with Carter's successor Ronald Reagan a total of seven times.